Not all dragons are white 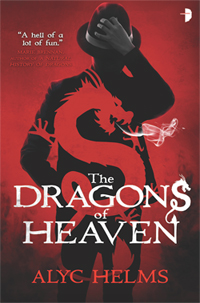 We interrupt your regularly-scheduled Poor Unlife Choices for an important announcement.

Friend-of-the-Game, and my personal writing idol, Alyc Helms is an accomplished fantasy author. She’s a graduate of Clarion West and her short story work has been featured in many prestigious venues. Now, her very first full-length novel is dropping next month, and everyone–myself included–is extremely excited. The Dragons of Heaven has been described as a pulpy action romp spanning continents and genres, as if Big Trouble in Little China was thrust into actual Asian folklore and had to fight to survive.

But there’s an interesting meta-story to this story that is of particular interest to readers here. See, Alyc spun this story off a role-playing character of hers from a game of Abberant, which isn’t World of Darkness but is another White Wolf title. Additionally, hearing her talk about letting her character come alive outside the scope of the game has been instrumental in helping me develop Tom. And while I don’t plan on novels of my own in the near future, you can look forward to more game-based fan-fiction-y pieces, so stay tuned.

Anyway, I will end this announcement with a recent anecdote from FOGcon, a local SF/F literary convention that Alyc and I are on the committee of. The main character in Alyc’s book, one Missy Masters, has supernatural abilities inherited through her family, the key one of which being a, quote, “preternatural control of shadow.” At the convention, Alyc did a reading from the book showcasing this specifically, as Missy used her abilities to summon a shadowy rat familiar to help her track down a burglar in an abandoned San Francisco movie theater.

So at the end of the reading, after the enthusiastic applause, Alyc shyly asked if anyone had any questions:

Me: “How many dots of Obten do I need to get that shadow-rat thing?”